Bollywood actress Anushka Sharma and her husband Virat Kohli are eagerly waiting for the arrival of their first child. The ‘Ae Dil Hai Mushkil’ actress has been enjoying her pregnancy phase to the fullest. From posing for a leading magazine to shooting for a TV commercial, the tinsel town diva has remained active throughout her pregnancy.

PICS: Anushka Sharma Spotted At A Clinic In Juhu

The soon-to-be mommy satisfied her cravings by gorging up mouth-watering pani puri. She shared a sneak peek of her yummy snack on her Instagram story. The caption for the post, “Go big at home.” Check out the photo!

Anushka and Virat were recently spotted on a lunch date in Mumbai. The ‘Dil Dhadakne Do’ actress had posted a picture wherein she was seen enjoying pizza. She wrote, “Go big or go home.” 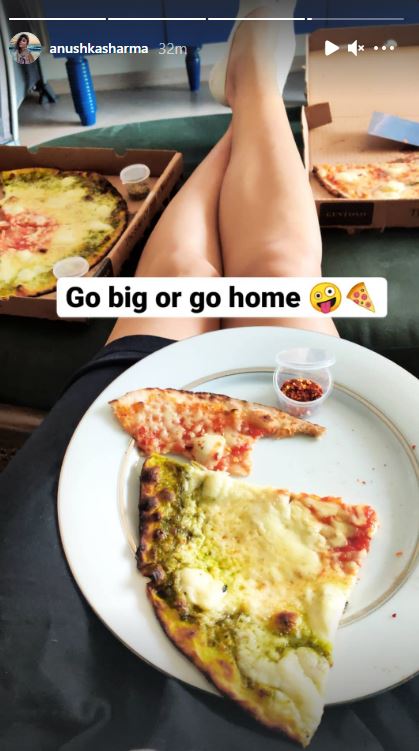 Virushka, as fondly called by fans, will welcome their first child after three years of marriage. The couple tied the knot on December 11, 2017. They celebrated their third wedding anniversary last month. The Indian Cricket team captain has taken some time off from his busy schedule to spend time with his wifey.

Anushka grabbed several eyeballs with her latest photo-shoot for a popular magazine. She flaunted her bare baby bump while striking a pose for the camera. The ‘NH-10 actress, while talking to Vogue, said that she only ate toast and crackers during her first trimester.

On the professional front, Anushka was last seen in ‘Zero’. The movie co-starring Shah Rukh Khan and Katrina Kaif hit the silver screens in 2018. Although, the ‘Pari’ actress has remained away from the big screen, she has managed to establish herself as one of the most successful producers in the digital space. Her two projects- ‘Paatal Lok’ and ‘Bullbul’ receieved a good response from the audience and critics.

Watch this space for more updates!