It has been exactly one year since pandemic started showing its ugly face and lockdown was imminent. Just like all the businesses, Bollywood too was impacted in a big way. Theatres got shut, productions came to a standstill, work dried up, and many wondered if life would come back to normalcy soon after.

In the midst of all of this, there were quite a few working women, most of them with families, who had to face the adversities around them in the B-town while also managing families at home, considering work from home became the new phenomenon.

ALSO READ | Women’s Day 2021: From ‘Chhapaak’ To ‘Gunjan Saxena: The Kargil Girl’; Here’s The List Of 5 Films Based On Women Empowerment

There were countless brave women from different fields of Bollywood, be it in the capacity of an actress or filmmaking or PR, who kept the good work going despite pandemic hitting hard in these 12 months. Especially as a working woman, they managed it all on the home as well as work front, despite everything going virtual.

As the world celebrates International Women’s Day, we reach out to some such women and ask them about how they faced the industry situation heads-on during last 12 months in the uncertain times and how did they still succeed in making their good work count, and making the right impressions. Most importantly, as a woman, was it any different for them to manage it all with good productivity.

The lockdown was a very difficult and depressing time for our industry. However, I tried to keep myself occupied, so as to not be overwhelmed. I shot a short film virtually, with Arati Kadav, wrote a script for a short film and then went and shot a digi film too. It did get difficult with all the household chores, but I managed to stay sane and get through it. Monisha Advani – One of the three producers at Emmay Entertainment (along with Madhu Bhojwani and Nikkhil Advani), which released Indoo Ki Jawani and wrapped up Satyameva Jayate 2 during pandemic.

The pandemic has been a reckoner of a unique kind. In some ways, I feel the inertia of life as it happens. I needed this pause button to recalibrate how we balance personal & professional goals.

Thankfully I have always striven to maintain a distinction between the two and that helps to be objective in my actions.

The work culture at Emmay is one built on unwritten unspoken equality. Somewhere I feel out of place in a rhetoric that singles out a particular gender because we work without that bias. I can say this much – Nikkhil experiences as much pain and challenge, as do Madhu & I!

Hence, getting back to work, normalising our routines, adapting to safety protocols were and will always be a responsibility shouldered by everyone at Emmay, regardless of gender assignment. Luckily we just finished the shoot for Bombay Begums in the first week of March 2020. I was fortunate enough to be able to work from home on the edit and post production of my show Bombay Begums. It was very different to be working remotely, and a big learning experience. Everything took longer. That said, it was a much more lonely experience. It was months of just me and my many screens.

I didn’t get anything else done this year apart from edit and post; no writing at all. However, I was working with a fantastic crew in whatever that I eventually did and that made it bearable. 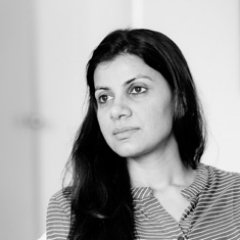 The pandemic has impacted the whole world and the entertainment industry was no exception. Often there was bad news coming in from all quarters; people losing lives, loosing jobs or falling sick. The past 11-12 months have been testing times for majority of people.

With releases of films, series and other content on streaming platforms, we stayed afloat thankfully. At home it has been a smooth ride with husband equally participating in household chores while managing his work and my kiddo entertaining us to sail happily through gloomy times.

Personally, I didn’t mind being home and doing most of the meetings over video calls. It gave us an opportunity to spend quality time with family. What we also learnt is that we don’t really need much to survive. If we want, we can’t keep our needs in check and can be happy with much lesser things in life. My team has been rock solid too; none of them let the work get affected in any manner and with few fantastic friends living in the same building, we have only good memories to take back from what we have been calling, the unprecedented times. Divya Dutta – Actress, who was seen in Special Ops, Hostages 2, Ram Singh Charlie, The Relationship Manager and Zindagi In Short in the last 12 months.

Whenever there is a storm, you go with it and that’s what happened during the pandemic. Everyone was in it together and derived strength from it. It was weird that there was no more normalcy. Work had stalled and it was only after a while that it started picking up from home. I shot for two short films and four ad films from home. I also did two photo sessions and that too when I was managing my home, my niece, my nephew and my pet. I had also planned to write my next book but then it was not so easy as there was this whole mental block due to lockdown.

This was the time when I knew that I had to be self equipped and self reliant. I did this domestic violence film with Neeraj Pandey during this time period. Whatever made me happy during these tough times, I did. It was a very different time though since as actors we are used to getting pampered with a large crew around us. Like for example when I did this ad film, I had to not just do my make up and hair, but also setup the camera and say action myself. This isn’t all as I cooked food too and laid down the table since the ad was about cooking! Yes, I missed my sets and people and hustle bustle around me, but then as is the adage – ‘This too shall pass’! That’s what I kept saying to myself and fortunately we are at a better place today.